Spiral compressors also eliminate any chance of pressure loss in the system.

Take a look at our range below. 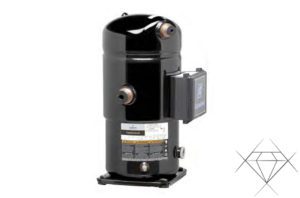 How do I order a compressor?

All our product pages feature a Reference No. you can mention this number on an email or whilst phoning us and this will help us locate the product you need. (If you're not sure which product you need our friendly team can also advise you of appropriate products when calling!)

We also have contact forms on product pages you can use to write an enquiry to us.

If you’d like help choosing a compressor or condensing unit that would suit your purpose our team can help, just get in touch!

Which compressor brands do you stock?

How do scroll compressors work?

Scroll Compressors or commonly referred to as spiral compressors, which consists of two scrolls where inner scroll is stationary in a fixed position, and the outer scroll rotates (which is why they are also known as rotary compressors) in a set path compressing the air in between.

The motion of the outer of the two creates suction that draws air from the openings. Air in the pockets between the two scrolls, and the continuous motion moves it toward the centre of the scroll, which reduces volume causing compression.

Once it reaches the centre of the assembly, the compressed air is discharged through a port.

What are some of the benefits that come with scroll/spiral compressors?

What are scroll compressors used for?

Scroll compressors are used in air conditioning units for commercial use and also for vehicles.

Léon Creux is the inventor of scroll compressors. first patenting them in 1905 in France and the US.